When Jack Tramiel invented Commodore in the 1970’s, he envisioned computing for the masses and not just the upper classes. Spearheading the personal technology revolution and combatting giants like Apple and IBM, Commodore became a household name by changing the way in which we interact, create and play with computers. From the advent of the groundbreaking Atari and Tetris games to the evolution of contemporary technological design, 8 Bit Generation dives into the home computer explosion and explores Commodore’s key role in shaping the future in which we now live.

The Commodore Wars will be available again in 2022.

There are four people who were unquestionably key to the digital revolution that took place in the 70’s and 80’s. In no particular order they are Steve Jobs, Bill Gates, Nolan Bushnell and Jack Tramiel: the latter two worked on kids, which was pivotal in shaping a new generation of tech savvy people. Nolan Bushnell brought them digital consciousness and Jack Tramiel brought them affordable computer power.

Jack Tramiel was not much about public relations, which is probably why he still isn’t getting all the credit he deserves. Even in the boom days he released few interviews in magazines and even fewer for television: you could probably count them on your fingers and have some bits left for flagging. We proudly own the very last, long, relaxed, vivid interview he ever released. We asked him why he allowed us to do that and he said that he liked our country (Italy) because he always got so much from there. He’s right: we had Commodore 64’s everywhere! The man who terrified his co-workers and competitors with his booming voice was the kindest person to us.

Chuck Peddle is a self-defined maverick, but what we learned interviewing him is that he is also a word flood. He’s just unstoppable. Yet we have an awful lot to learn from him. You quickly understand that he met everyone, he’s been everywhere and has been involved in everything: always in a maverick fashion, in the Chuck Peddle way. His contribution to the revolution is unquestionable, but still seems quite underrated. What is wonderful about him is that every fact you pretend to know well, appears slightly different when told by Chuck Peddle: there’s always another angle to view the story from.
The Commodore wars is no less than the true story, among others, of the Apple II, Commodore VIC20, TI 99/4A, Sinclair ZX series and the Commodore 64, the latter being the biggest selling single computer of the 20th century and all of them having been the machines on which a couple of generations of kids learnt what a computer is. But it is also the story of a number of wars which Jack Tramiel led against his competitors with his unquestionably bad temper and shrewd strategies.

Production of the 8bit Generation project started in 2010 and lasted until the end of 2012. After that we nearly went broke a couple of times, but some friends in the retro-computing community never gave up on us. Finally we resolved to answer one of the many calls Jason Scott was addressing us and thus we started again.

In September of 2014 we attended XOXO festival in Portland Oregon and show some footage of the 8bit Generation project to a large audience to great acclaim: we learned that Jack Tramiel and Commodore are held as crucial in the entire digital revolution. We knew it, but we learned that the audience too is willing to hear THIS story at last.

We resolved to post produce a 90 minutes long episode by the working title of “Growing The 8 Bit Generation”, focused on the home computer explosion and Commodore role in the personal computer revolution. In August 2015 we launched a Kickstarter campaign to raise money for that, putting a 25.000 dollars goal to go for it. A month later we had been staff picked by Kickstarter and raised some 45.000 dollars from backers all over the world.

In February 2016 we released “Growing The 8 Bit Generation” for backers only. 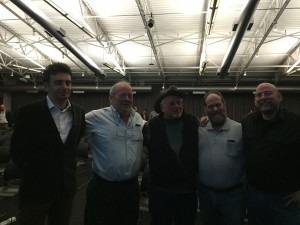 Our biggest thanks to these friends: without you this huge project never happen…

This project is alive thanks to all the kickstarter backers and our sponsors:

Here is the alphabetical list of all backers whose name in in the credits. Thank you all!